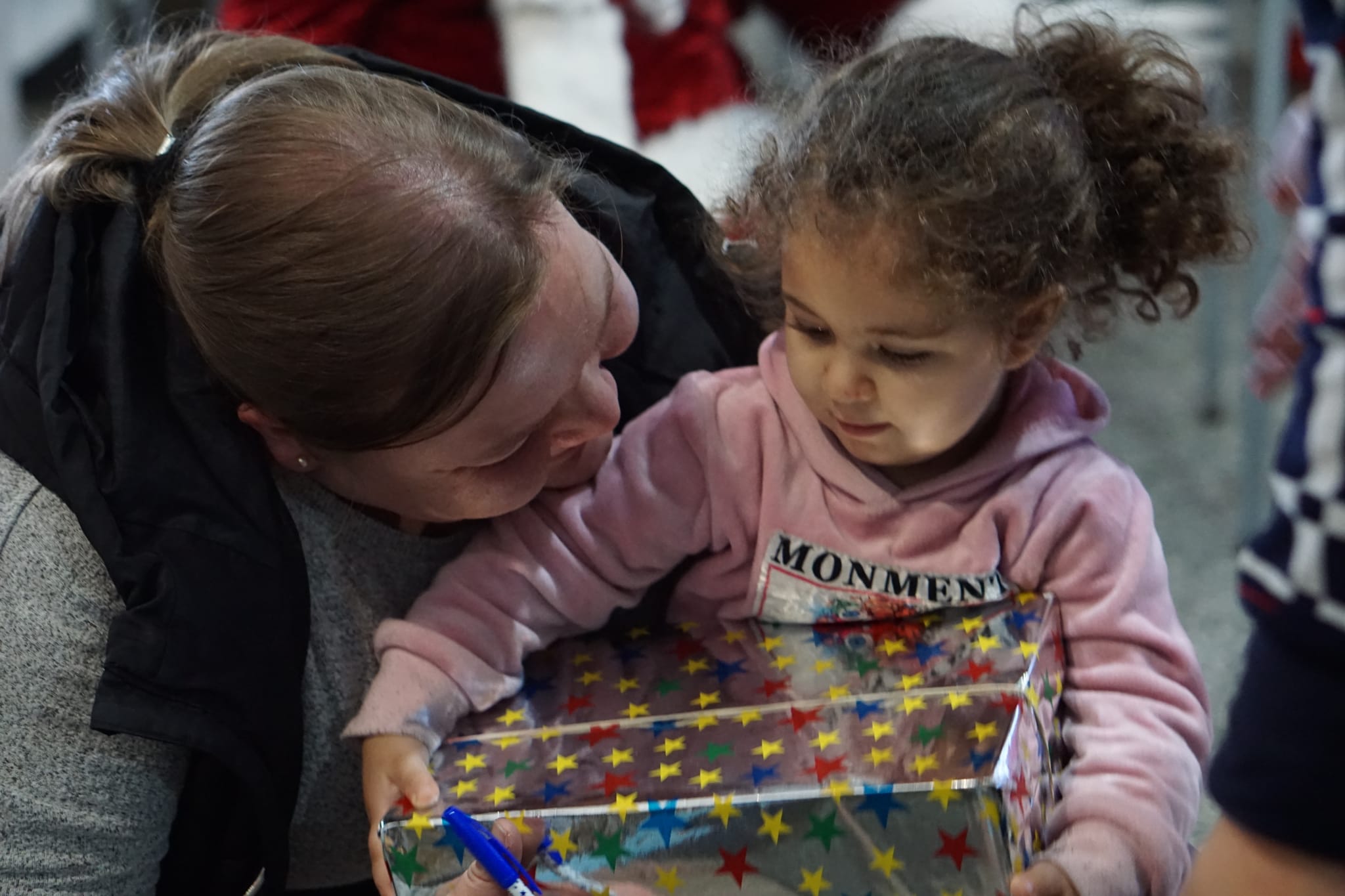 Here you have reports from trips to Balkan, January 2022. #vánocenacestě (#christmasontheroute) had been great! For the first time, we managed two trips in the same time! Polish team – Michał, Mirek, Wojtek and Estera left to Bosnia on 1st of January. Czech team – Ilona, Pája, Samuel, Lída and Štěpán to Serbia 2nd of January.

The Polish team in Bosnia and Herzegovina had a really challenging week. On the border with Croatia, despite the inclement weather, hundreds of people are still trying their luck when crossing the border. Our team helped them provide basic necessities, especially food (flour, oil, eggs, meat, milk …), clothes and shoes, as well as wood or briquettes for heating.

The week was extremely emotionaly, but also physically demanding. In addition to the “old” (well-known) camps, the team also visited a numbers of temporary camps in the mountains, impossible to reach by car (or it was very difficult!). The delivery of wood to one of the places, as well as other service of the team was slowed down by snow, in the second half of the week.

Many thanks for this trip to you, for your prayers, financial help and also to Niels, a Dutch missionary who has been serving on the site for a long time and is our support and source of information!

Not only thankful for opportunity to help and provide food and other staff, we are very grateful for the opportunities to talk to people… Over tea or food from poor kitchens, the team listened to many stories, offered prayers and passed on gospels and SD cards with materials in various languages ​​(gospels, audio bible, testimonies, etc.).

Among the visitors was also a group that recently lost a friend at the border. He drowned in a border river, but his body could not be found, so they are now afraid to tell this message to his parents. They were unable to give him a proper funeral. Parents often ask about their son by phone, they suspect that something is wrong …

Many people at the border have tried the crossing countless times. They either fail or are returned. Every attempt means a huge exhaustion, often a loss of necessary personal belongings and a camp place. The Croatian border guard can also be aggressive. People are beaten with batons, bitten by dogs … The Bosnian terrain is physically demanding for migration. They are tired, they lose hope. The help of the team and its company is a welcome change, actually such a big social event!

In addition to these meetings, the team also celebrated the birthday of S., whom you already know from the previous trip. He is eighteen, on the route since he was twelve. He left for a new life, studies and job in the Union. After a long time, he had a proper celebration, in an almost family circle. But he still misses his family very much! 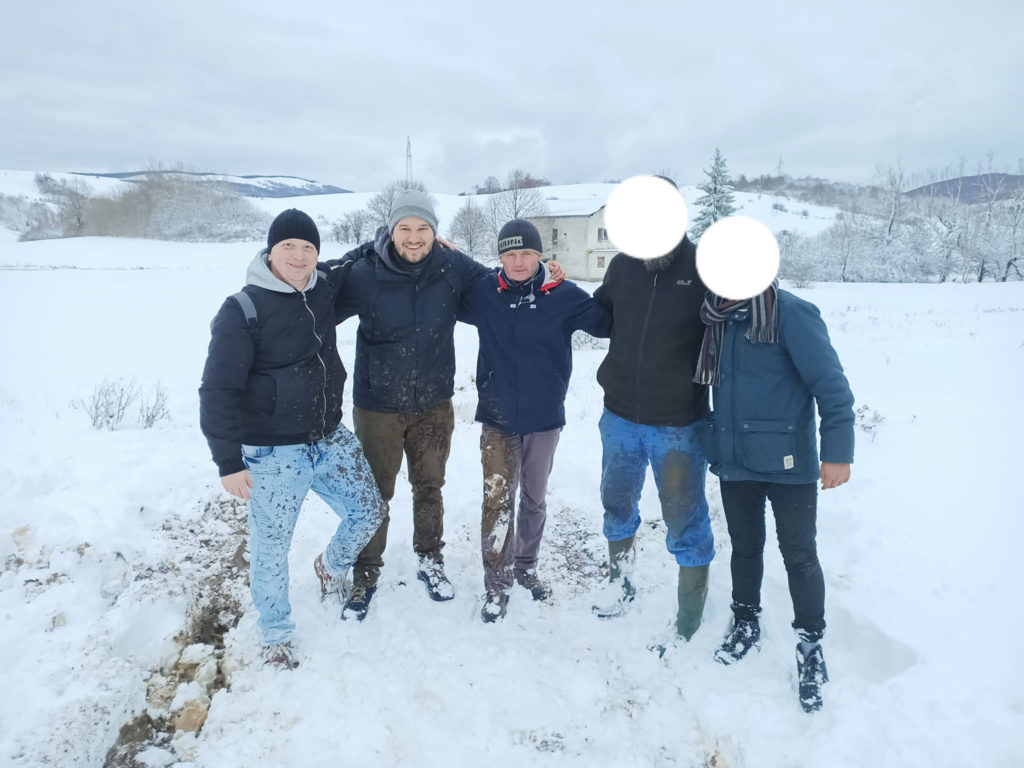 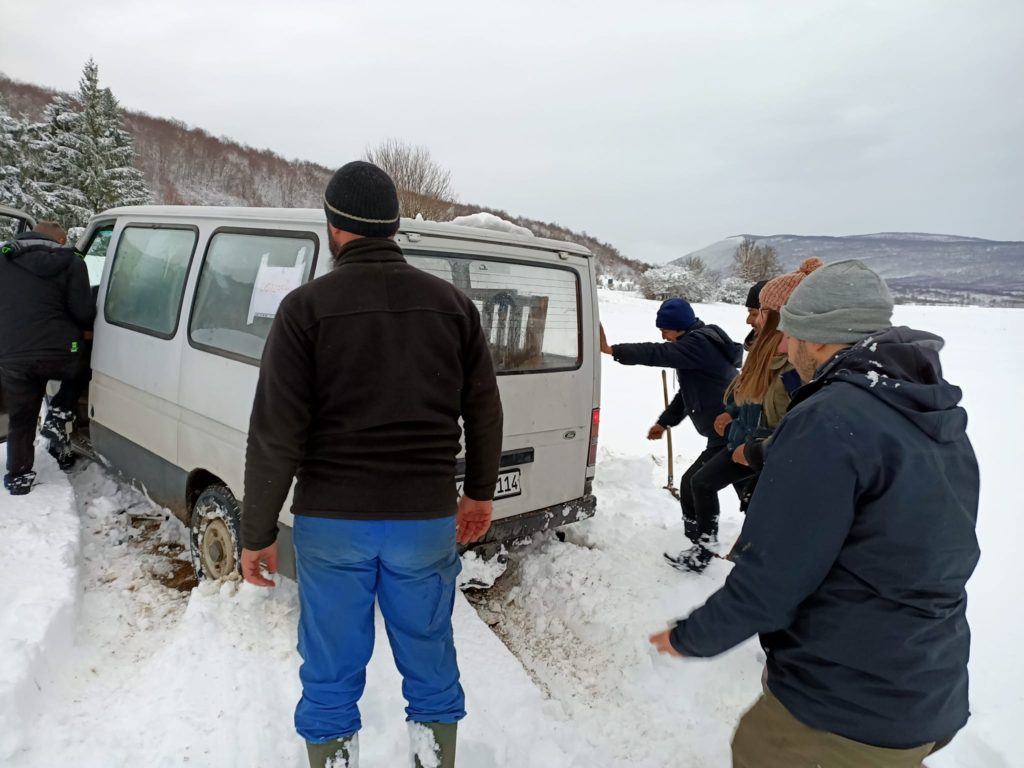 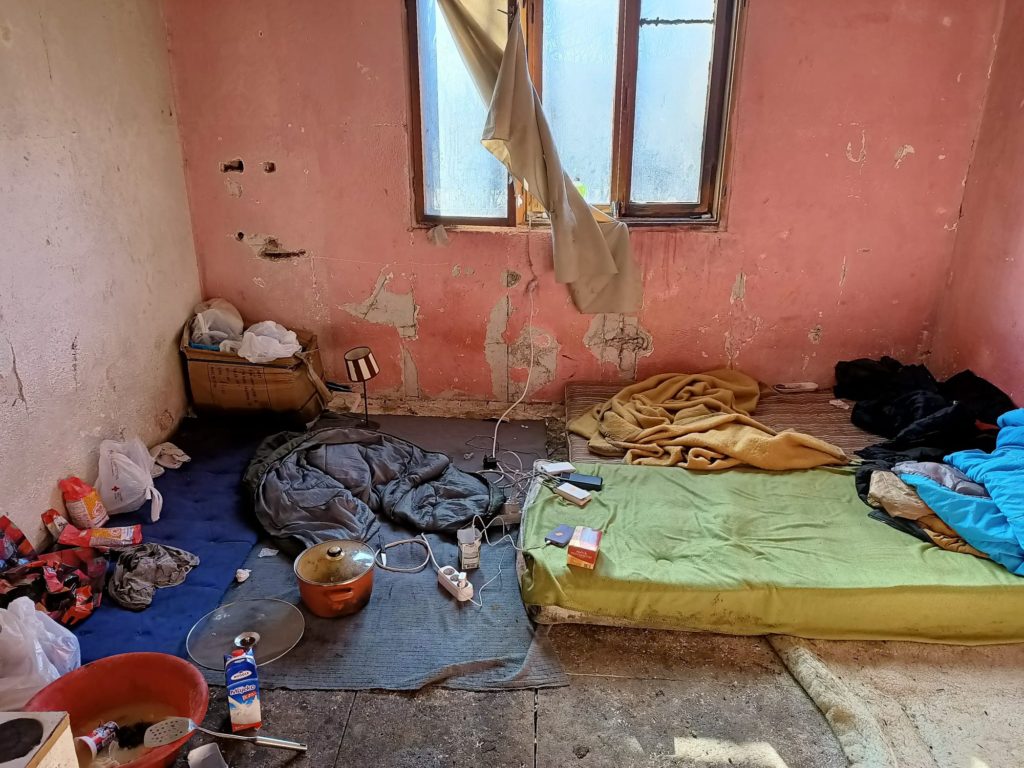 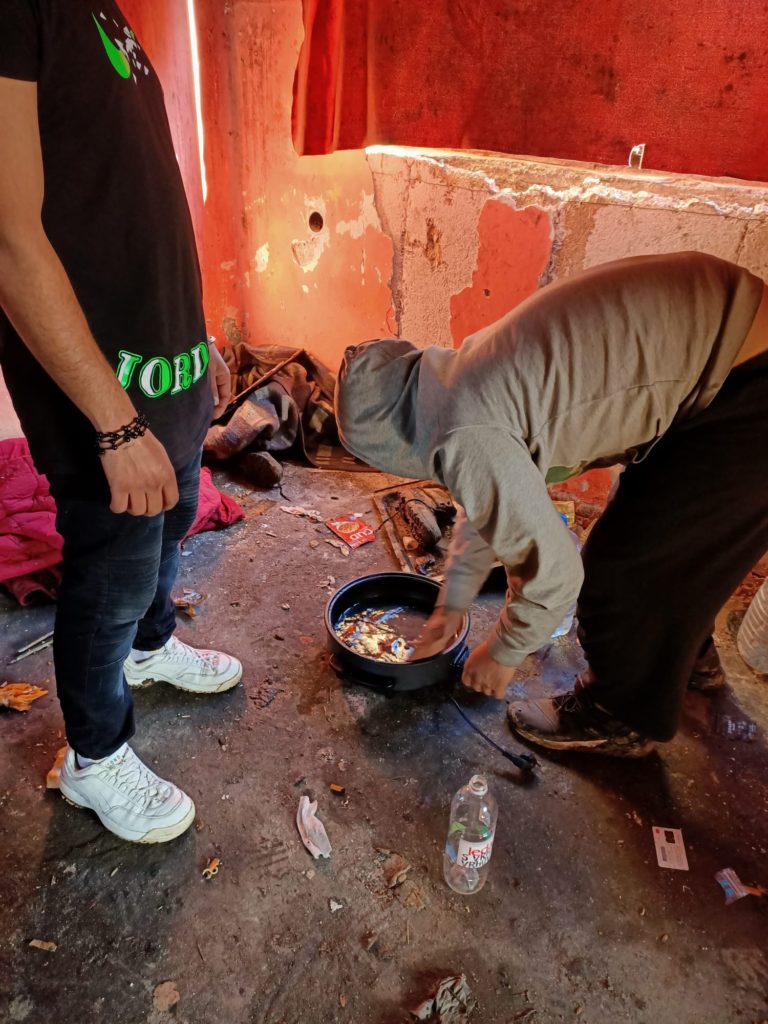 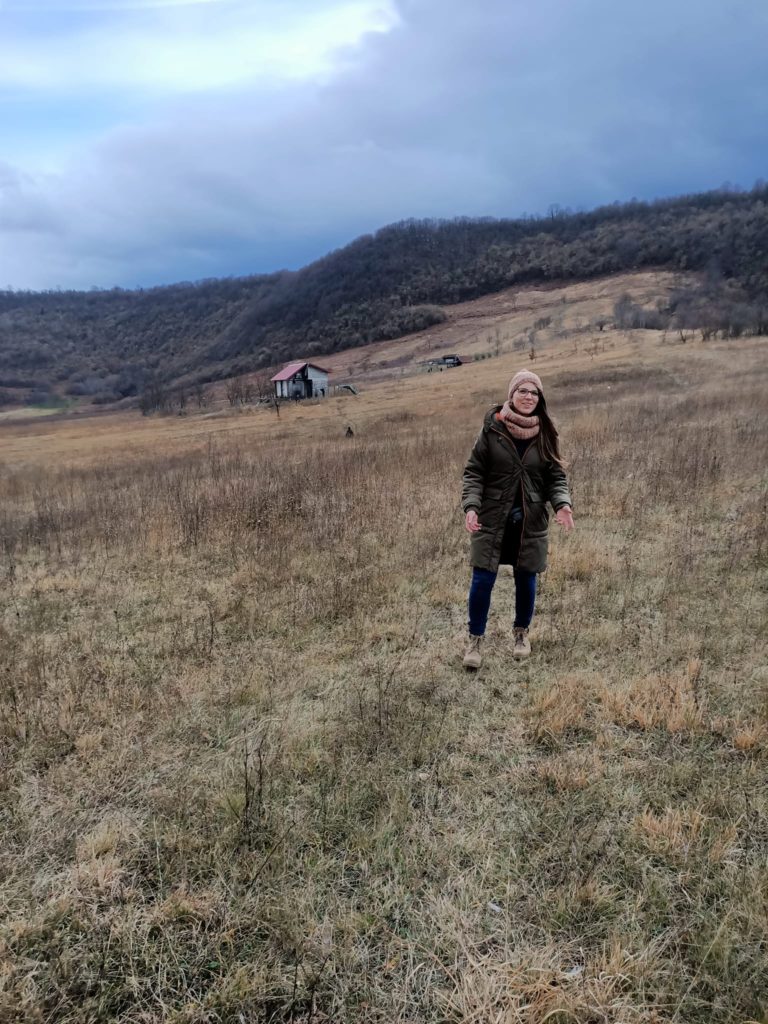 The trip to Serbia was a bit shorter … Due to the Orthodox Christmas, the team had to do all the work in three days! The main goal of the trip was to hand over Christmas packages in two camps  for families with children – Krnjača and Šíd. There were a total of about 150 children in these camps, which was a little less than we expected, but it is migration that creates our service …

But even this number of children meant a lot of work! Thanks to the Polish organization CME (and the team that fearlessly transported the packages from Bulgaria!) we already had some packages on site, mainly for girls. But we had to make the boys’ packages ourselves! Every night full of packing and making the lists from shopping… (Imagine Santa’s workshop from American movies …)

Before handing over the packages, there was always a Christmas performance under the baton of Dragan and Daniela, who have been serving on the site for a long time. Thanks to the work of Pastor Dragan and his wife with Roma youth, the performance was enriched by the service of these young people! (Grandpa Mráz had seven helpers!)

Thanks to your generosity, we were also able to support the service among the Roma, with the Christmas packages that are distributed these days!

In addition to giving gifts, the team had some very pleasant meetings. Thanks to the beautiful and warm weather, the children and the team played outside with balls and balloons. Eventually, Samuel also used the pump to make minor repairs to sports equipment. He repaired two bikes and blew balls that could no longer be used for playing.

In Krnjača camp we were invited to several families for tea. In one of the families, we prayed for the health of the children. Of the three boys, two suffer from health problems. One of them was diagnosed with a malfunction of one of the cerebral hemispheres. The second of them lost his eye due to the removal of the tumor. (But this handicap does not prevent him from being a great singer! He also showed us!) The family perceives the whole situation as a huge stigma. Although medical care is good on the spot, it is not so specialized.

The other family is dealing with a meeting their father and siblings, which could take place soon! They haven’t seen each other in years! The mother and eldest son were baptized in the camp last year and told us their experiences of living with Jesus. (In Camp Dragan holds religious services, Bible classes and preparations for baptism.)

It was not possible to visit families separately in Šíd. The rules of the camp do not allow it. An even greater blessing for the team was the café in the immediate vicinity of the camp, where almost 30 people, several families and especially young people (teenagers) who have been on the road for a very long time met in the end. Their travel experiences are often scary!

We distributed gospel and SD cards in both camps. In Šíd, we were very pleased with the reaction of the Kurds who love our gospel –  our copies of Luke’s Gospel! Why? On the front page is Kurdistan. It is very often said to these people that this state does not exist.

Along the trip, the team met nations that they have not seen on the road for a long time, or rather in the south, outside the Balkan route. These nations included the Syrians, the people of Burundi and Somalia.

In addition to visiting the camps, we also managed to meet several groups on the streets of Belgrade. We visited Miksaliště, where they temporarily take care of unaccompanied minors – boys. Dragan will bring Christmas packages to the boys who live here after Christmas break.

Thank you very much for your support! The collection for the purposes of these two trips covered our costs and provided abundant help and a oceans of ​​joy! Thank you for celebrating this second Christmas in the Balkans with us! We appreciate it a lot!

We use cookies on our website to give you the most relevant experience by remembering your preferences and repeat visits. By clicking “Accept”, you consent to the use of ALL the cookies.
Cookie settingsACCEPT
Manage consent

This website uses cookies to improve your experience while you navigate through the website. Out of these, the cookies that are categorized as necessary are stored on your browser as they are essential for the working of basic functionalities of the website. We also use third-party cookies that help us analyze and understand how you use this website. These cookies will be stored in your browser only with your consent. You also have the option to opt-out of these cookies. But opting out of some of these cookies may affect your browsing experience.
SAVE & ACCEPT